Enchanted Valley is an iconic PNW hike due to the presence of a beautiful chalet, built in 1931. At first glance the chalet strikes the imagination and harkens to a rugged, romantic, frontier past. But the relatively large scale of the chalet and quality of the construction reveals it’s true original purpose as a commercial, recreation lodge.  It was constructed and operated by The Olympic Recreation Company under a special use permit as a backcountry resort between 1931 and 1942. During World War II it served as an Aircraft Warning Service station with plane spotters stationed there between 1943 and 1944.  Eventually the National Park Service purchased all of the holdings of the Olympic Recreation Company and chalet was opened to the public and used as a back country shelter and ranger station up until 2013.  Over the years, the Quinault River continued to meander closer to the chalet and by 2014 it had undercut it considerably.  The chalet was lifted and placed on runners and a team of horses and mules moved it to the present location.  Again threated by the ever encroaching river, it’s final disposition is unclear. The NPS is set to release a final determination in 2021 with high possibility of the chalet being dismantled (their recommendation) or allowed to be taken by the river.

It will be sad to see this historic chalet succumb to the ravages of nature so it was imperative to me to visit it before that happens. Even beyond the allure of the chalet, though, Enchanted Valley is worthwhile destination for a romp. There’s a reason this location was chosen for the chalet, it is stunning!  The views are astounding, with spring snow-melts creating waterfalls that tumble more than 4000′ from the peaks to the valley floor. And the wildlife abounds. Of particular note are the ever popular bears that draw many people to the area each spring as the mommas emerge from their long slumbers with cubs in tow. It is not uncommon to see them browsing, slumbering, or even frolicking in the river. Caution is of course advised, but as with most backcountry black bears, as long as you keep your distance and don’t provoke them, there’ll be no need to worry.

This hike will stop a little more than 3 miles short of Enchanted Valley with camp setup at Pyrites Creek. This is partly to shorten the length of the loaded hike but also because permits for Enchanted Valley go quickly. If you decide to camp in Enchanted Valley, be aware that bear canisters are required.

The day begins at Graves Creek Trailhead, where there is a privy and plenty of parking. The hike begins with an easy climb of about 650′ over 1.5 miles before descending to Pony Bridge.  This is popular day-hike destination for the fantastic views of the canyon cut by the Quinault River.

Beyond Pony Bridge you’ll enjoy a gentle climb on an entirely forested trail until you reach Pyrites Creek Camp. There are several small creek crossings and a few spots where the creeks drain onto the trail itself. Plan to do some rock hopping and possibly even getting your toes a little wet. On this trip there were also quite a few blow-downs, some appeared fairly old so there doesn’t appear to be a lot of motivation to remove them.

About 6.3 miles in, you will pass by a marker for O’Neil Creek Camp. There is a short side trail that takes you down to the camp where you’ll find a privy and access water if you need it.

Otherwise, the trail is mostly unremarkable so take the opportunity to look closely as there are plenty of interesting plants and wildlife along the way.

Pyrites Creek Camp is right on the trail, you won’t miss it.  Plenty of open, durable surface, spots to pitch a tent with easy access to the river. If you continue just a little further you’ll cross over Pyrites Creek and find another couple of good camp sites.  Both areas have a bear wire, but no privy.

The hike from Pyrites Creek into the valley is an easy 3 mile hike. With less than 800′ of elevation over more than 3 miles, the trail is essentially flat.  To start, the trail is similar to that of day 1, mostly coniferous forest and the occasional blowdown and stream crossing.  At about .8 miles, you will come to a requisite photo spot, an enormous downed tree with a root ball for a background that is large enough to swallow an entire group. 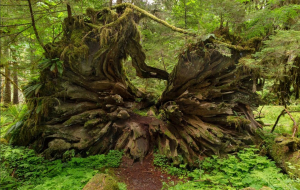 Closer to Enchanted Valley, the valley floor widens as you hike through some open groves of Red Alders. Be on the constant lookout for bears as you may find them browsing, getting their fill of grasses, flowers, and other vegetation. 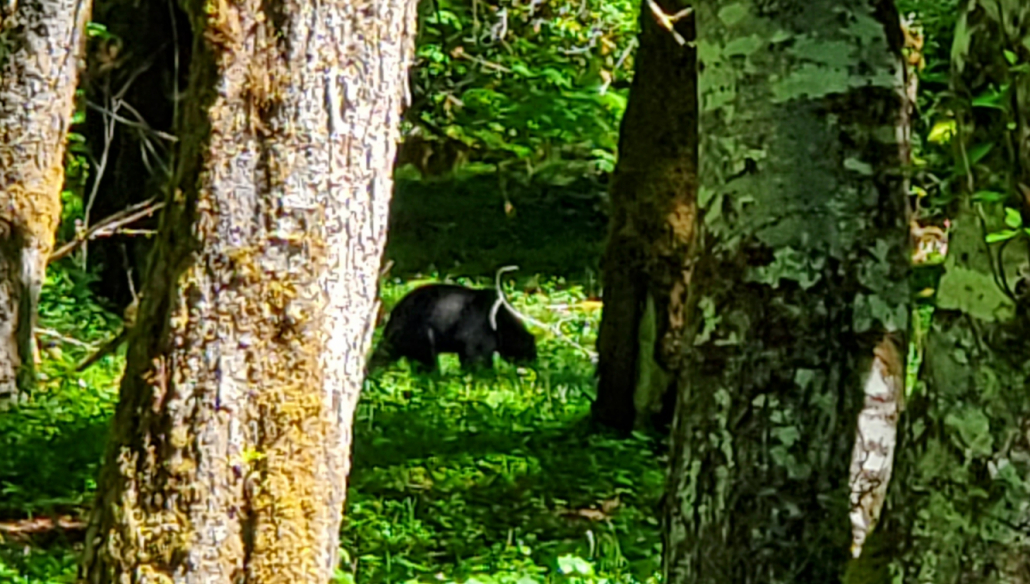 Just as the chalet comes into view, you will cross the Quinault River on a nice bridge. Perhaps 20-25′ above the river with a hand-rail on just one side, it may be unnerving to some.  There will again be some creative creek navigation, log crossings, and rock hopping before finally reaching your destination.

Once near the chalet, take in the open valley floor with plenty of fantastic spots to setup for lunch. There are a couple of privys and and many established camp sites.

After a relaxing day exploring Enchanted Valley, it’s time to head back to the trailhead. You’ll simply be reversing your hike in so that gradual climb on the way in is now an easily, gradual descent on the way out.  Save for the short climb just after Pony Bridge, but it’s only 350′ or so it’s over before you know it and then it’s all down hill again back to the trailhead.

The return hike on an out-an-back is sometimes a bit of a let-down. Hike goals accomplished and now familiar scenery, it may be tempted to hustle back to the trailhead as quickly as possible. I prefer to continue my romp, looking even more closely for the flowers I may have missed on the way in, or discovering some small wildlife that has the occasion to pay the trail a visit.  Like this yellow spotted millipede. Not uncommon, I saw three before the day was done. These interesting little critters exude a toxic hydrogen cyanide on you if you pick them up (not enough to harm a human, but some people to report irritations … so handling not advised). 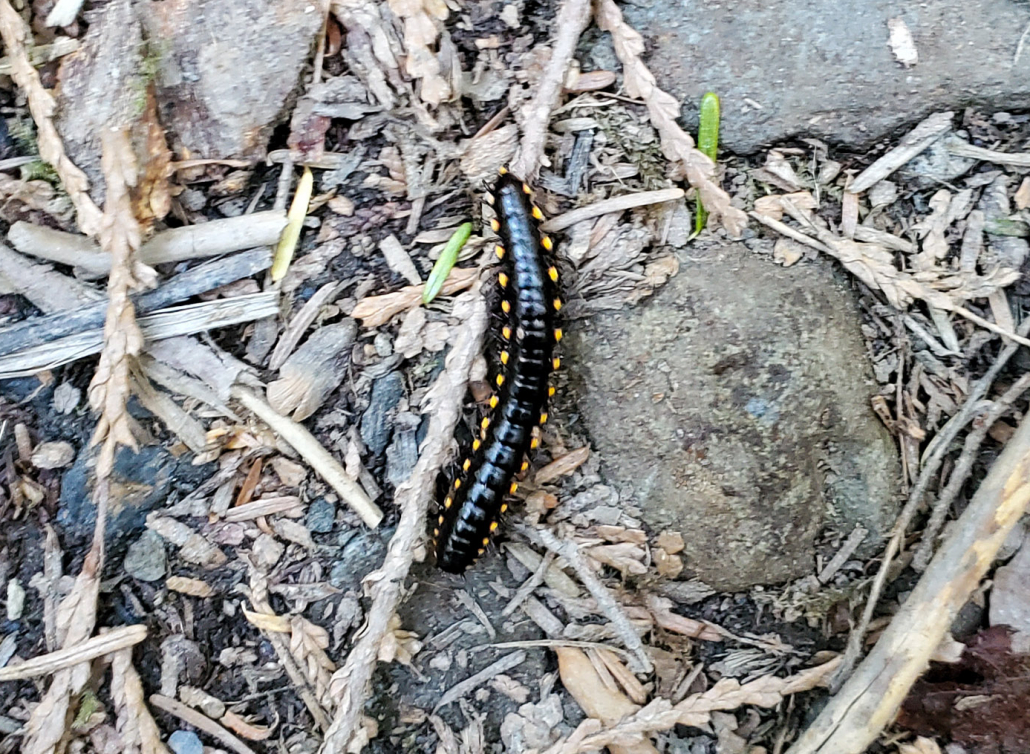 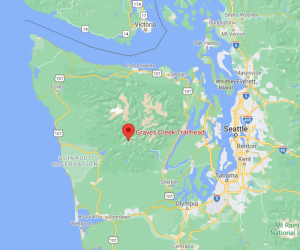 Green Trails Map No. 167 – Covers remaining distance to Enchanted Valley and beyond.

I often like to drive as close as possible to the trailhead the night before my hike so that I can get an early start on Day 1 without a long drive. This trip lends itself really well to this as there is a campground right near the trail head. The Grave Creek Campground is a ONP camp. It is first come, first serve, and has a $20 per night fee.  The sites are very nice, some right on the river, and there are bathroom facilities in the summer, pit toilets year round.

Alternatively, also nearby is the historic Lake Quinault Lodge.