The Ozette Triangle is always a fun and interesting early-season hike. I’ve written about this hike twice before so I am going to skip a lot of the details about the hike itself in this post. If you are looking for more general information about the hike, see my post Ozette Triangle and the follow-up Revisting Ozette Triangle.  In this post, I am going to share a little more beta about a couple of homesteads and a gravesite you can find that take you back to the days of the early Scandanavian settlers.

First, a (very) little history. Most of the early history that I can find focuses on Anders Victor Nylund. He was clearly influential but he was not the first. The area was already well known and written about by James Swan, an Indian Agent that lived among the Makah in the mid 1800’s.  And, there were other Scandinavia settlers in the area, like the Palmquist’s in what is now called Old Royal, WA. You’ll find names like Palmquist, Andrews, and Johns around the Clallam Bay area and it appears that they have largely been settling independently. So it was perhaps Nyland that had the idea of establishing a village at Ozette Lake and thus responsible for the influx that would lead to about 130 families settling around the lake.  In any event, Nylund came to Ozette Lake in 1892, a journey that would not have been as straight foward as it is today as there were no roads. Instead, he would have departed Seattle by steamer to Neah Bay where he would hire a Makah boat to take him around Cape Flattery, and land at Ozette Villiage. He would have then completed the journey on foot, walking the several miles along the trail that is now the Cape Alava trail.

Nylund’s family joined him in 1895 followed by many others. Within just a couple of years there were established schools, a church, and even a couple of post offices. In 1897 the area was placed off-limits to homesteaders by the Washington Forest Reserve and many started to abandon the area. The reserve was reduced in size in 1900 and the lake was re-opened to homesteading, but the vision of a village was lost and few remained long.

Pete Roose settled near the prarie in 1907 and there he maintained a flock of sheep, grew vegetables, and an orchard. He originally built a log cabin to live in and eventually added a storage shed and root cellar, and a barn. He even built a sawmill and milled his own lumber. This he used to build the two-room house that you can currently find on the property. 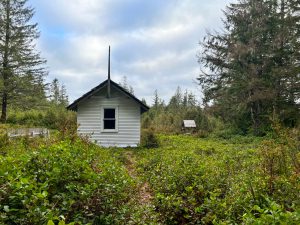 Not all maps will note the presence of this homestead, but you will see markers of buildings on the USGS maps: 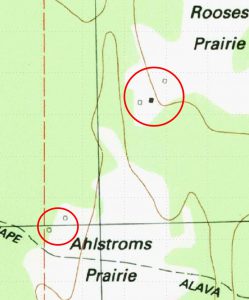 There are no maintained trails to these sites, though there are definitely primitive trails that can be followed. The trail to Roose’s homestead is overgrown, and thick with Salal. Some may find it difficult to follow and I do recommend taking a GPS receiver or compass to aid in your navigation. It’s easy to get turned around in the thick and high Salal.

Most of the maps I have seen showing the trail to the Roose homestead do not accurately pinpoint the location to depart the Cape Alava Trail.  I marked the intersection as 10U 0373187E 5335023N (also on my CalTopo map to the right). At this location, you will see a small clearing just of of the trail with a pile of timbers. Head to the right, just beyond the timbers and you will pick up the primitive trail. 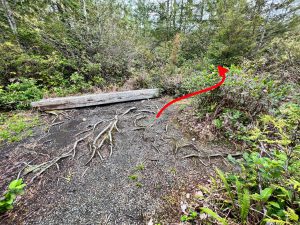 Follow the primitive trail, which will roughly follow a bearing of about 345° from the intersection w/ Cape Alava Trail to the house, for not even .5 miles. Given the absence of a maintained trail, the site is clearly not managed by the Olympic National Park as a feature they are inviting visitors to see. But they do have a welcome plaque on the window of the house for those that do find their way here. And the site is maintained and kept in a good state of repair, thanks to its inclusion in the National Register of Historic Places as a historic district.

Unlike the Roose Homestead, the Ahlstrom place is not within a protected historic district and so is falling victim to the effects of time. But it is still an interesting site and worth a visit, particularly given the proximity to the trail. Any maps showing the primitive trail are likely showing a very old path to perhaps the original home site, which is long gone (lost to fire, but you’ll find piles of debris which may be remnants of a second make-shift cabin he built after the fire). Refer to the intersection in my CalTopo map which will put the place to exit the Cape Alava trail at about 10U 0372713E 5335131N.  At this location, you should be able to step off of the boardwalk trail, duck between a couple of trees where you will be under cover of trees but with no understory. From here, you can practically see the old barn that remains. If you are bushwacking at all you are in the wrong spot!

I believe the general area of the Ranger station at the head of Ozette Lake is the location of the Nylund homestead. However, on the USGS quad maps, there is a Grave marker and this is indeed the burial site of Anders Victor Nylund. 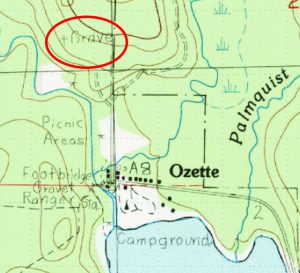 Anders Nylund died in 1920 at the age of 66, after falling ill. In 1928, his son Alfred, went out onto Lake Ozette by boat and did not return. His boat was found, but he was not, until in 1938 when some folks stumbled upon his skeletal remains in the woods near the lake. I’ve come across a few stories that suggest his boat may have capsized, or drifted away whilst he was on land, and he became lost trying to find his way home. He was apparently found with a hand over his heart and this has spawned other stories of unrequited love and Alred succumbing to a broken heart. Whatever the truth may be, he is buried next to his father.

As with the homesteads, this site is not really publicized. It is accessible, but it does not appear on most maps and there are no trails. To reach the site, from the parking lot at the Ozette Ranger Station, follow the Hoko Ozette Road to the North and take a left just beyond the parking lot. This will be a road leading past a ranger residence. Walk past the buildings where you will see a path leading up a grassy hill to a clearing. I believe this is probably the septic field. 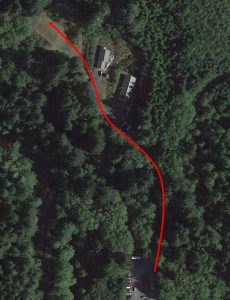 Head to the far right corning of the clear where you will see an opening in the trees: 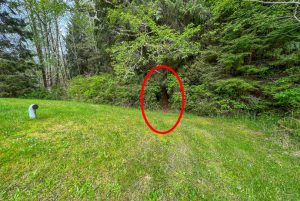 Head through the opening and from here you will be heading on a rough bearing of about 313° for about 450′.  If anything, head a little more westerly at first and then correct as you get closer. The gravesite is surrounded by a white picket fence. The picket fence is described in the earliest accounts of the grave site, so it is likely original, though clearly being maintained by the NPS.

The large white cross bearing the name A. Nylund is Anders. Alfred Nylund is to the left of this.  There is a wood cross with the name Ida Nylund Keller, who I believe is Ida Johanna Nylund, the daughter of Anders and Johanna. She was born in 1900 and died in 1988.  According to an obituary I found, she was cremated, so I assume some ashes were left here and the cross left as a memorial.  The second wood cross appears to bear the name Myra. Ida did have a daughter named Myra, but from what I can gather she is still alive in Port Angeles.

Lake Ozette History, They Followed A Dream to Ozette

This map is by Per Berg of Sequim, Wa. It’s a fun map, but a nice review before you hike as I like the way it presents your hike as a journey through time. Stepping back in time through the prairie homesteads, then Ozette Villiage and on to the more ancient Wedding Rocks. 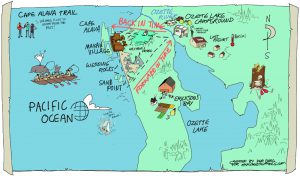 Beyond Chili Mac
Scroll to top