The Osprey Ultralight Stuff Pack is an awesome little pack that I like to use as a “summit bag” when I am base-camping. At about 3.8 ounces, it’s the lightest option I’ve come up with. And it packs down really small into a self-contained pocket, making it easy to throw into a corner of your main pack until you reach base-camp. However, one down side is that the lack of support and padding means that any load will slump to the bottom of the pack and items in the pack can poke you in the back.  This is entirely expected in a pack like this as there just wouldn’t be any other way to make the pack this light and this compressible. However, this mod will address this issue by making use of something you will likely want to have in your pack anyway, a sit pad! 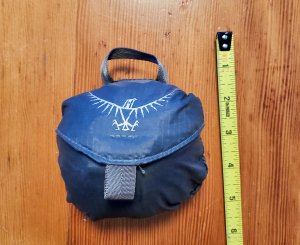 I really like this mod because it not only solves a problem, but it does so by using a sit pad that you might already be carrying anyway. And if you aren’t you really should consider it. Under one ounce for a dry and comfy place to sit while eating lunch on a summit, absolutely! Finding multiple uses for gear is one of the best ways to keep your pack light. And at just $5 for the Litesmith Sit Pad, this is also a really inexpensive mod!

To get started, you will need:

This mod is pretty straight forward so I won’t go into a ton of detail, I mostly just wanted to share the idea because it works pretty well.  We’re basically just going to cut the Sit Pad to the shape of the back panel of the bag.

To do this, I first laid out the bag and then roughly drew the shape onto a piece of cardboard. I used a ruler to measure a few key points, like distances across the very bottom, the top, and the high and low points of the curve. Doing it first on cardboard let’s you tweak it a bit before you commit to cutting up the sit bad. 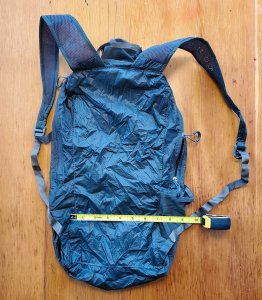 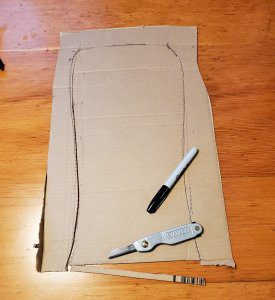 Once you have the rough shape outlined, cut it out using a blade and test fit in in the pack.  When you are ready to commit, use the cardboard as a template and trace the shape onto the sit pad. 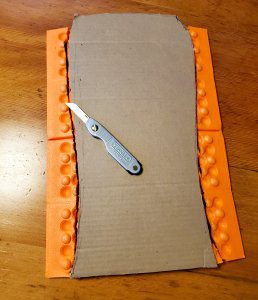 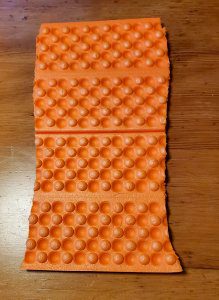 Fine tune the shape as needed, but once you’ve got it dialed in, your done! That’s it!

The sit-pad is still plenty big enough to still use as a sit pad and now it can also does double-duty as support in your summit pack!  The trimmed pad weighs in at 16 grams. Since you were likely going to carry the sit pad anyway, this mod actually saves you about 8 grams. It’s a win-win!

Once you have the rough shape outlined, cut it out using a blade and test fit in in the pack.  When you are ready to commit, use the cardboard as a template and trace the shape onto the sit pad. 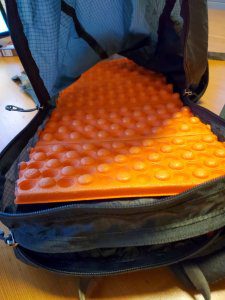 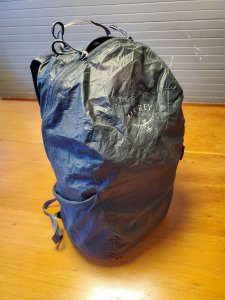 The jury is still out on the need to secure the pad inside the pack. When I first started using this pack, I would take one of those microfiber camp towels, fold it up, and place it inside the pack. That would keep things from poking my back for a while, but it would eventually slump to the bottom. This is actually what spurred the idea for this mod and at first I was thinking of various straps or sleeves I could construct to hold that towel in place. I had settled in on a way to attach just a couple of  pieces of shock cord to the interior when I figured I could just use the sit pad. For now, I’ve decided it isn’t necessary to add the cord as the pad stays in place just fine once loaded up. I may revisit this after it’s seen a bit more use.

I also think some thin Evazote foam pad may work out well instead of the sit pad. Something like the Gossamer Gear Thinlight Foam Pad. I use one under my sleeping pad to prevent it from sliding around on the tent floor and many people use this in double-duty fashion as a sit-pad.  I think it might be perfect in this application as well. It’s 1/8″ thick which I think is too thin, but it can be folded. The primary reason I didn’t go this route is because it just wasn’t available and I didn’t want to cut and experiment on my current pad.  If you are wanting to give it a try, foamorder.com sells Evazote in slightly larger sheets and in varying thicknesses.  Please let me know how it goes!

The Thinlight may even work without cutting it down and instead just folding it to roughly fit into the pack. I may give this a try in the field sometime to see.

After a bit more use on the trail, I’ve decided the pad will benefit from something to keep the pad in place.  It definitely helps to pay attention to the direction of the folds. The top fold should be set to fold towards your back, like shown in the diagram below. Otherwise, the top will flop over and the bottom panel fold onto the bottom and the entire pad will start slipping lower. 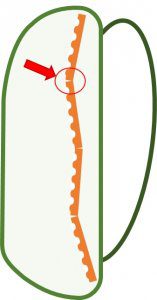 However, I had my sewing machine setup for another project so I figured it would be a good time to just add a couple of elastic straps. I has some very small 1/8″ elastic lying around so I just added two straps and tacked them onto the extra fabric in the seam allowance around the perimeter of the back panel. 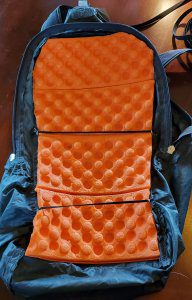 Note that these may be affiliate links. When you purchase products using these links, a small commission is earned to help keep this site running.